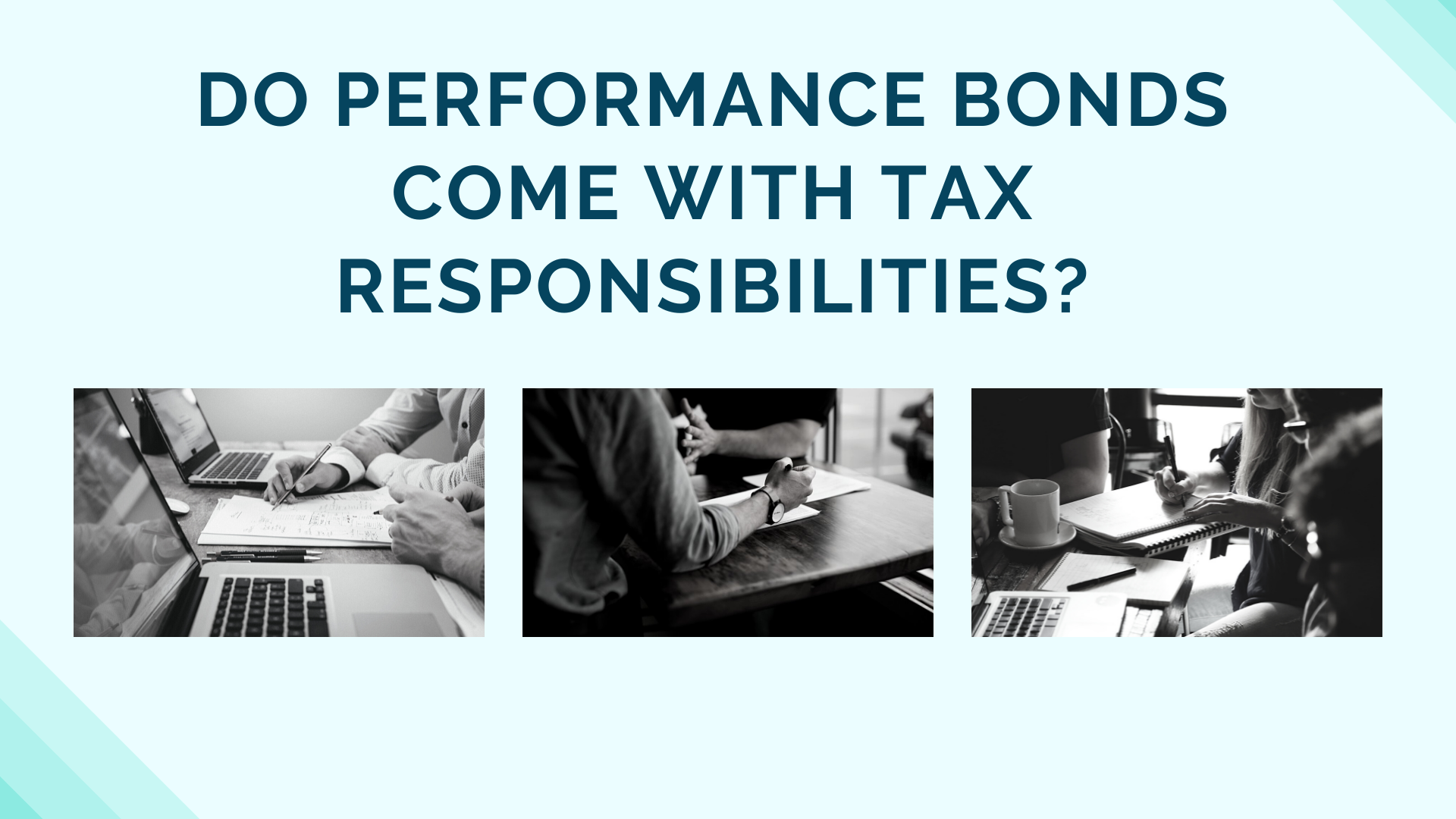 Is it possible for performance bonds to be taxed?

A performance bond is essentially an agreement between two parties (the issuer and the beneficiary) in which the issuer agrees to pay a sum of money if certain conditions aren’t met. This sum of money is denominated as “claims”. The typical purpose for this transaction is that it guarantees that the party who provides the service will carry out their end of the agreement after receiving payment. A performance bond acts as insurance, but instead of insuring property or life, it’s used to ensure services are properly completed.

The difference between a Performance Bond and an Insurance policy is that insurance has premiums that are paid regularly, while the issuer of a performance bond does not collect premiums. Rather, they get their money when the beneficiary makes a claim on it.

Many of these types of bonds are often governmental in nature, such as tax collection bonds or construction project development bonds. For example, if someone is building a public bridge over navigable waters but doesn’t finish the bridge before he runs out of money, his

Performance Bond would ensure that those who have paid fees to use the bridge will be reimbursed for those fees until another company could be found to complete the project or until enough money was collected from tolls to complete it. In this instance, taxes wouldn’t even come into play as the costs are fronted by the issuer, not the beneficiary.

The goal is to prevent disputes about whether or not certain work was performed correctly or materials were used appropriately. If there are problems, then the surety takes over and makes any corrections needed so that the project can be completed successfully. The surety company pays for those costs out of its own funds upfront; it then tries to recover those costs by billing the contractor.

A performance bond is a three-party agreement between the contractor, the surety company, and the owner of the public project. The contractor agrees to perform all obligations as stated in the contract, and the surety guarantees those duties will be fulfilled if needed.

The owner of a public project may choose to waive its right to a performance bond at its discretion, but most require that contractors provide one as part of their bid proposal or application for a license. If they do not submit a performance bond with their proposal, then they cannot win the contract.

What is the procedure for filing my performance bond tax?

One of the major issues that concern contractors is how to file their performance bond taxes properly. When the relationship between the owner and contractor ends, it is important for both parties to settle all outstanding financial accounts. This includes finalizing payment on any changes or additions to the contract (known as change orders), repayment of retention, reimbursement of line-item allowances, and settling upon the balance of the performance bond tax funds.

When filing your performance bond taxes you must provide all necessary documentation requested by your surety including original invoices and receipts showing how much federal, state, and local taxes you have collected.

Due to the fact that your surety is acting as a tax collector, they are required to file all federal, state, and local reports on your behalf. The procedures vary by jurisdiction but most employees of the surety act in the capacity of an independent contractor when filing these reports. You should discuss with your surety how often forms are filed on your behalf.

It is important to know that if you fail to file any required reports or pay any outstanding amounts owed due to erroneous reporting by the surety, then you may be held liable for this amount plus penalties and interest.

You will also be charged with fraud if it can be proven that false information was provided in order to avoid payment of the bond tax. You should contact your surety and provide them with all necessary information so they can file the reports and remit funds to Federal, State, and Local government agencies on a timely basis.

What is the appropriate amount for a performance bond?

A performance bond sometimes called a bid bond, contract bond, or construction bond, is a guarantee that the project will be completed according to specifications laid out in the contract. Performance bonds are paid by the contractor at the end of each milestone (usually every 20 percent) of project completion.

While the exact amount of any performance bond is determined by both city and state requirements, typical amounts can be extrapolated from national averages. The most common areas that require larger performance bonds include heavy construction (such as road building), government projects (such as military installations), and public works (such as bridges).

On average, these types of projects require a performance bond equal to 100 percent or more of the total contract value. For instance, the Federal Highway Administration recommends that contracts over $5 million carry a bond equal to 75 percent of their value.

Is it possible to get a refund on a performance bond?

Yes, but most companies will not refund your money. Performance bonds are required to ensure that work is done correctly and all terms of the contract are upheld. It is more common for construction companies to release funds after the first progress payment has been released by the owner or general contractor.

The general contractor or subcontractor must prove that they already paid their subcontractors, suppliers, and labor before they can be reimbursed some or all of this money. On some projects, owners may pay off existing invoices prior to issuing payments to the prime contractor.

If this is the case then it’s likely your performance bond can be returned once those invoices have been processed (provided there is no outstanding amount). If an existing issue with your subcontractor or supplier has been resolved, then the bond may be released.