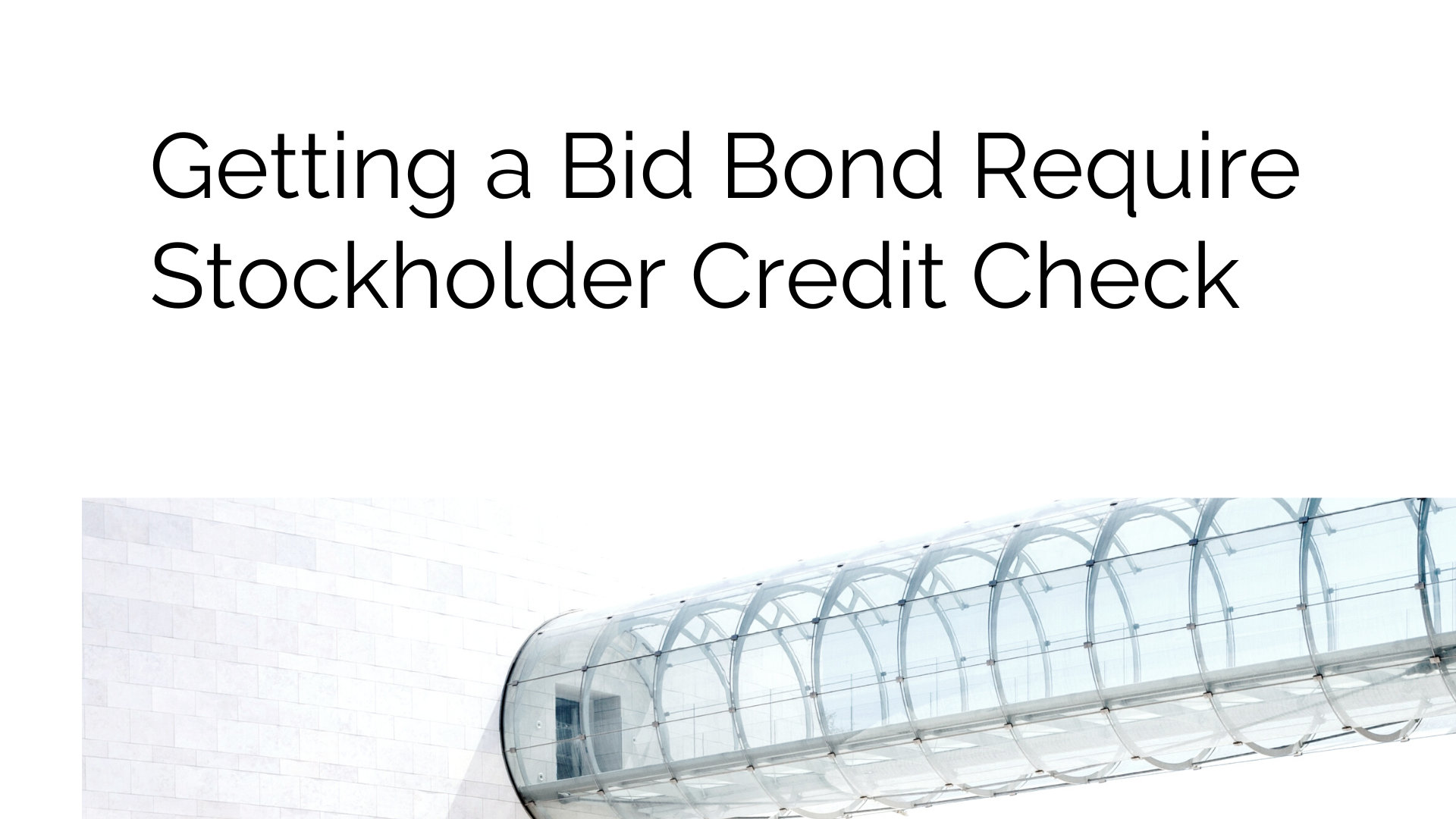 With a bid bond, why is a stockholder credit check required?

The bond guarantees the subcontractor’s performance on the project, which includes paying all their sub-bidders and suppliers. If for some reason you cannot pay your subcontractors, the owner will not have his project completed and might incur financial and other losses.

A major part of the bond is a requirement for an extensive credit investigation which helps in the evaluation of your character and ability to handle funds. This is not to discourage you from bonding; rather, it serves as a protective device for the owner in receiving complete and dependable performance at a fair price.

A bid bond is designed to be an insurance policy for the owner of a project. The owner hires construction contractors to work on their construction project based on proposals that are submitted by the companies bidding on it. A qualified company would have done its homework and provided quotes for each part of the work. They would know their costs and estimated time to complete the project.

In the construction industry, a bid bond is a type of surety bond which guarantees that a bidder will enter into an agreement provided they are awarded the contract.

This type of bond is submitted as part payment to the contracting authority and serves as proof that there is no intention to deceive or defraud.

In fact, if awarded the contract, the bonding company agrees to pay any difference between what was initially tendered and what was finally accepted.

To be eligible for a bid bond, a contractor must have already completed several projects in this same trade category. The higher number of past successful bids on similar projects forms the basis of qualification for receiving higher levels of bidding work.

Bid bonds can also benefit private individuals who wish to bid for work in certain categories.

Typically, bid bonds are required when a contracting authority is unsure of the total cost of the project. The bid bond guarantees that there is no hidden agenda and the bidder is serious about their proposal.

What are the bid bond requirements?

Bid bond requirements vary by city. The following examples are guidelines that cities may follow or may use as a reference point to develop policies specific to their own jurisdictions. Many ordinances address the penalties if the contractor fails to complete the work covered by his bid, but not so many require guarantees of performance. Bid bonds are commonly required of general contractors on contracts over $5,000 and can be more generally applied when large sums may be involved or where there is an element of risk associated with performance.

Bid bond requirements are spelled out in the Request for Proposal (RFP). The bid bond guarantees that if awarded the contract, then the contractor shall enter into a written agreement with the owner, and perform the work. Bid bonds may also be called “Performance Bonds” or “Construction Bonds”. Failure to do so is usually punishable by forfeiture of some amount of money up to 100% of the bid price. After adding all applicable taxes etc., this would be considered liquidated damages and can not be disputed.

A bid bond is basically a guarantee that the bidder will fulfill all of their obligations under the contract, regardless of how much money they wind up winning. After submitting all of their bids, bidders are required to post bid bonds before they can officially win the project. Bid bonds secure the interests of everyone involved in the bidding process because ensuring that contracts are fulfilled helps prevent work stoppages and bad business relationships between the municipal government entity and public utilities company.

A Bid Bond is basically a guarantee that an organization will fulfill all of its obligations under one specific construction contract regardless of how much they may end up winning once everything is said and done. After submitting all of their bids, organizations are required to post Bid Bonds before they can officially win the project. Bid Bonds secure the interests of everyone involved in the bidding process because ensuring that contracts are fulfilled helps prevent work stoppages and bad business relationships between the municipal government entity and public utilities company.

A bid bond is issued by who?

A Bid Bond is issued by the Contractor, to guarantee that it will enter into a contract with the owner if its bid is accepted. The bond does not protect the owner against loss arising from any default of the contractor following a successful bid. However, there are some exceptions. For example, in the case of federal projects, FIDIC contracts include provisions for payment of liquidated damages to the owner in case of stop or delay in progress.

A bid bond is issued by the surety to guarantee that it will enter into a contract with the contractor if its bid is accepted; it guarantees performance and payment under contract; but only if applied for successfully and provided for in contract at the time of bidding or change in the existing contract.