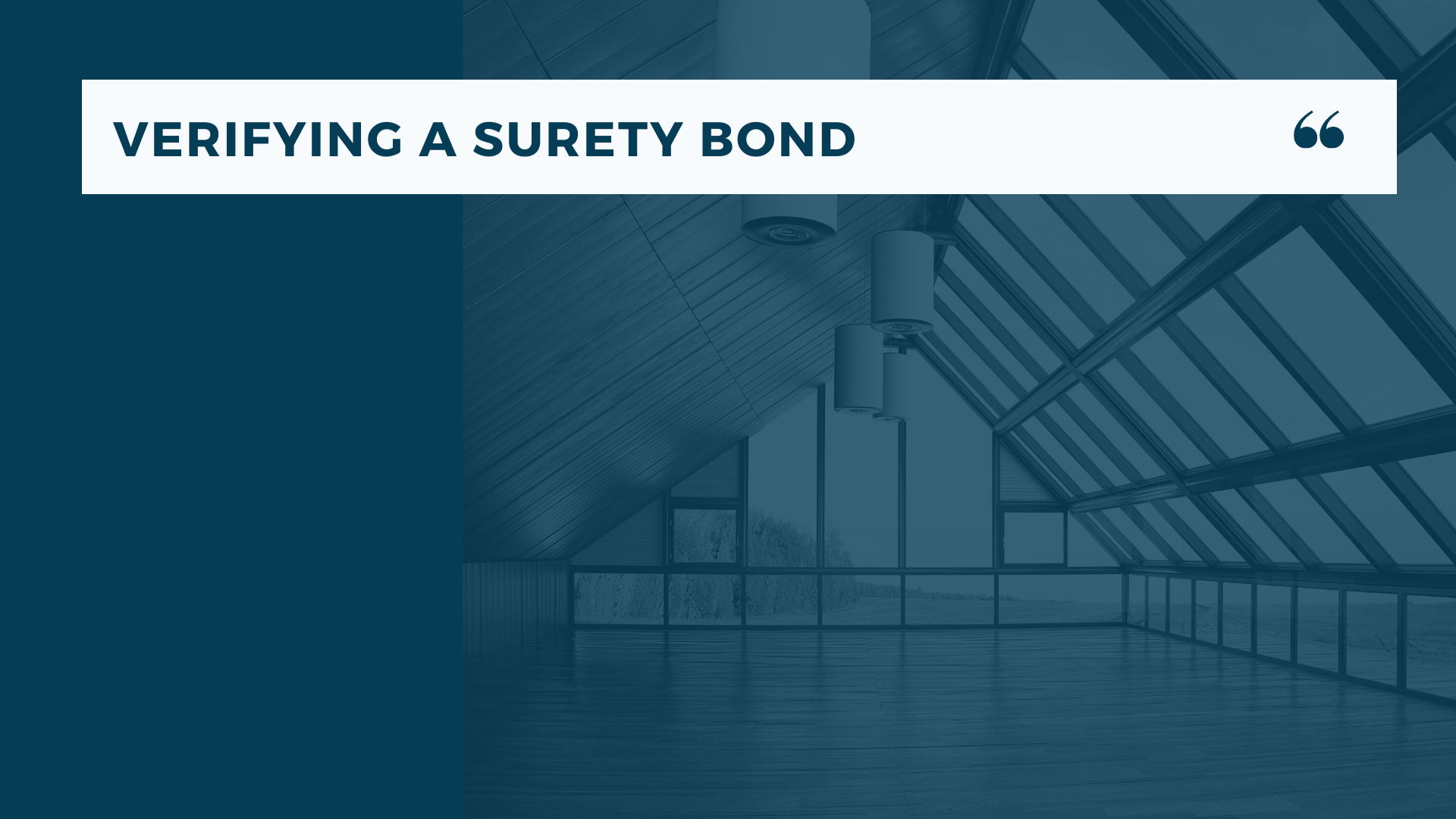 How can you verify a surety bond?

A surety bond is a type of contract between three different parties. The first party in the agreement would be the obligee or issuing agency, which is typically an organization that provides financing for projects such as school construction or road building. The second party in the agreement is the principal, who is usually referred to as “the contractor.”

The contractor becomes part of the agreement when it enters into an agreement with the obligating agency to provide labor and materials at cost for a certain outcome. For example, if someone were applying for funding to build a bridge over state route 789, they may have been contracted with by ODOT to do so under a set amount of time and specific specifications. In order for this transaction to occur both parties must be sure that the contractor will be able to complete the project in a timely manner and according to set specifications.

This is where the third party comes into play, they are known as the surety. The surety’s role is to make guarantees for both parties; if at any point during or after construction it becomes apparent that promises have not been kept then ODOT may file a claim with the surety agency to recoup any money lost throughout this process due to sub-par workmanship on behalf of the contractor.

Sureties may come in many forms depending on their affiliation with different issuing agencies, but most fall within one of three categories: insurers, banks, or bonding agents.

What is proof of surety?

When you are verifying a surety bond, the first thing that must be done is to identify the actual type of surety. This can usually be done by looking at documentation surrounding the agreement between the two parties. This information will usually state directly whether or not they utilized an insurer, bank, or bonding agency as their financial backer.

Once this has been established it may be possible for more detailed information about the backing company to be found on their website. Most companies celebrate their success stories and achievements on public websites which detail how they were able to help another party meet their goals through financing or insurance coverage.

Proof of surety can also generally be found by contacting either party involved in creating a contract; if there is no responsive contact with those involved then contacting the company themselves would be your next step.

If all else fails, you could contact the issuing agency directly! Some agencies will have records of their contractors and what types of financing they have taken out to create their contracts, this information may also assist in verifying proof of surety.

What is the responsibility of a surety?

In order for a surety to properly guarantee a contract, they must first ensure that the contractor is financially capable of completing their project. By doing so they can be sure that if something does go wrong and the client wishes to file a claim, the contractor will have enough money in the reserve to cover all necessary expenses.

Once this has been done, they also take on another role which requires them to handle any legal disputes that may arise from the contract. If there were ever a disagreement between ODOT and our hypothetical contractors then it would fall upon our hypothetical surety company at that point to meditate and come up with an answer that both parties could work with moving forward.

What are some ways you can verify proof of surety?

Some of the most common questions that come up when verifying proof of surety are how much work has been done on a project, what is the average amount of contract disputes, how long have they been in business, and what percentage of contracts do they fulfill.

Luckily there are some resources available to help verify this information if it is not found on the company’s website or other documentation about their work! The first place where you can start would be calling either ODOT or your contractor to see if they have any additional information that could help track down any specifics related to the transaction.

If both parties are unable to provide you with further information then contacting the company directly may prove fruitful. Lastly, many companies maintain public records which detail all aspects of the work that they have done, this information is often easy to find online!

Is a surety bond a liability?

Both the contractor and surety company take on liability when they enter into a contract, but once there is a claim made against either party it essentially becomes an obligation of the insurance or backing company.

What does it mean to be in good standing? If they do not meet their contractual obligations and they are unable to rectify the issue with ODOT then both parties involved will be required to present documentation about their efforts at resolving the transaction. If you would like any further assistance verifying proof of surety then feel free to contact us directly!